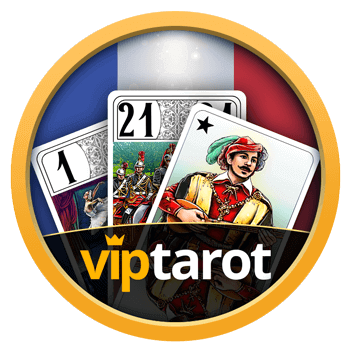 How to play French Tarot

The French game of Tarot is a card game for 4 players using the traditional 78-card tarot deck.

At the beginning of the round, the dealer deals the cards, 3 by 3, in a counter-clockwise direction. He also puts away 6 cards that form the « dog ». The first 3 and the last 3 cards from the deck cannot be dealt to the dog. At the end of the deal, each player receives 18 cards.
The first dealer is chosen at random and in the following rounds the next player in counter-clockwise direction is the new dealer.

The players then look at the cards they have been dealt, and an auction begins, starting from the player to the right of the dealer. Each player can « Pass », or bid higher than the previous bidders. The available bids are, from the lowest to the highest:

When bidding, a player can also announce a slam. He must then win all the tricks in the current round in order to score bonus points. Otherwise, he will score penalty points.

A player can bid or pass only one time for the current round.

The highest bidding player becomes the taker. The remaining three players become defenders until the end of the round.

If no one bids, the round is void and the deal passes to the right of the current dealer.

If the taker has bidden a Small or a Guard, the dog is revealed to all players. Then the taker adds the cards of the dog to his hand and sets aside the same number of cards of his choice before play begins (called the “aside”).

The taker may not set aside kings, trumps and the fool, except if he cannot discard anything else. Oudlers can never be discarded.

The cards set aside by the taker remain secret and at the end of the round are added to the taker’s score.

A player may declare a handful, if he has a given number of trumps, before playing his first card. There are several handfuls, depending on the number of trumps the player has:

The play of the card

The player to the right of the dealer leads the first trick, and the play proceeds counter-clockwise, with every player playing a card from his hand to the trick, according to the following rules:

Three cards known as oudlers are of particular importance in the game: the 1 of trumps (called Petit), the 21 of trumps, and the Fool (Excuse). These cards, when won by the taker, lower the point threshold needed to fulfil the contract.

The round ends when the last trick has been played. The taker counts the number of oudlers and the point value of all the cards he has won. The score of each player is then updated, and a new round starts, until the end of the game.

A game finishes when a given number of rounds has been played. This number is fixed at the beginning of the game. If all 4 players pass, the round is not counted. Then the winner of the game is the player with the highest score. If two or more players are with an equal highest score, an additional round is played.

Value of the cards

The total value of points in tarot deck is 91.

At the end of the round, the taker counts the number of oudlers and the point value of the cards he has won and the cards of his « aside » or the cards of the dog if he has bidden a Guard Without. When the taker plays the fool in a trick other than the last, it’s considered won by him and thus lowers the points threshold.

Scores are calculated in the following way:

If the taker has fulfilled the minimum card points, the calculated points are won by the taker from all three opponents. For example, if the taker has 80 points, his final score is 80 * 3 = 240 points. His opponents score -80 points each.

If the taker has not fulfilled the minimum card points, the calculated points are lost by the taker from all three opponents. For example, if the taker has 70 points, his final score is -70 * 3 = -210 points. His opponents score 70 points each.